Hey everyone! I hope all of you are doing wonderfully and are living your best! I abandoned this thing. Again. Sorry about that. 😅 My last post was a sort of run down of what was happening. This one isn't going to be that way.

I want to start telling you all about the various concert/band experiences I have had. I always knew that I would enjoy going to concerts, getting to hear my favorite songs live, watching bands play in person and that completely satisfying and happy moment right after and sometimes days after, where everything feels okay. Like I've mentioned before and the base of starting this thing, music helps me handle my depression. Just like so may other people and maybe just like you. I would compare the energy at a concert to smudging your house. It cleans you of all the bad vibes for a while. Putting it simple, concerts make me happy.

My first concert EVER was on 18-10-19 for the band Escape The Fate. I had mouthed off several months before to my parents, saying wouldn't it be awesome if a band I like came around my birthday. I never expected it to really happen and even less thought I would actually get to go. I've listened to this band for a few years , off and on. Some of their songs mean a lot to me. I took a friend with me, who then was barely more than a kid I knew from school, but is now the closest thing I can call my best friend.

The show was AMAZING. Two bands opened for them. Into The Sea and Frida (this will be really important later on). I was about 2 people away from the stage and when ETF came on, I was just shocked. I had fun all night, I sang, I screamed along with everyone else. I felt different. The adrenaline rush of the whole thing was new to me, being that excited.

I managed to get pictures with and meet a couple of them before they had to leave. 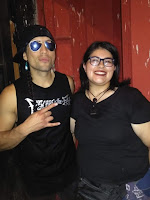 This is Robert, he's the drummer in the band. He also happens to be Hispanic and Native American just like me, so that's cool. He was outside the stage area ready to take pictures and meet fans right after their set was over. I was grinning so hard (again, the adrenaline rush of the whole thing). I asked him if I could hug him and he said yeah, sure, but that he's all sweaty. It was so gross, but I didn't care. I had my friend take a picture of us so I could remember this exact moment. 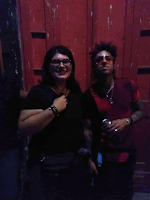 I also got to meet their guitarist, Kevin “Thrasher” . He had done a contest on Instagram giving away tickets for their tour. My mom commented but trying to get VIP, along with a little bit of my story. She got noticed and won the free entrances, but it didn't really matter since I already had general admission tickets. So my mom messaged him, still trying to get VIP (if you're reading this, I love you mommy 😘). Unfortunately, I didn't get VIP, but I got to meet him anyways. After meeting Robert, we were nearly kicked out of the venue by the personnel and waited around outside. A couple minutes later, Thrasher comes out to meet fans and I barely got back in there to meet him. I told him that I was the crazy lady's daughter that kept messaging him. AND HE REMEMBERED. We actually got to talk a little. He asked me about how I ended up in Mexico, if I liked it here, that kind of stuff. He hugged me TWICE and even hugged my friend for coming to the concert with me and told him to take care of me. 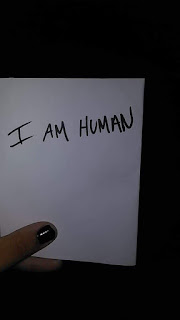 And finally, after meeting them two, me and my friend waited a few more minutes outside before we got an uber. More than anything, I wanted to meet the other guitarist, TJ. The band came out to get in the shuttle to go back to their hotel and I saw him. For those that don’t know me in person, I am incredibly shy, I have a hard time interacting with people and I hate feeling like I'm being a bother. But I saw TJ and I yelled his name to get his attention and walked up to him, and asked him to write out these lyrics for me so I can get them tattooed. Just listen to this song and you'll see why they're important to me. He had his hands full of stuff and had to shove it off on someone else to be able to do this for me. It meant so much though because he could've said no and gotten into the shuttle. I am still proud of myself for swallowing my nerves and doing that. And that was it. The band got into their shuttle and I ordered the uber to go home. It was definitely an unforgettable experience that I will always hold close to me because it was my first concert and the beginning of me finding where I fit in.

As of this moment I have now went to a couple other concerts and music events. I always thought that Monterrey didn't really have a music scene until this concert, because I hadn't gotten out enough to know. But now I know and there are some amazing bands here that I will be telling you amazing people about in the next few weeks.

That's all for this time friends. Stay safe, take care of yourself and never forget that it's okay to not be okay.